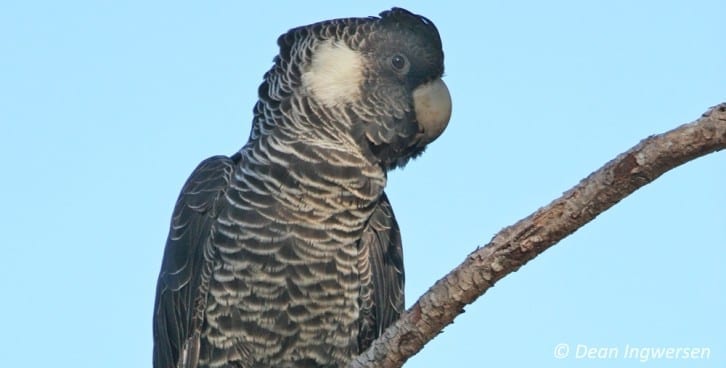 Each day this week we will be shining a spotlight on a threatened bird species from the states and territories in which our offices are located around Australia. Today it’s our Western Australian office which is located in the outskirts of the Perth CBD. The southwest of Western Australia is recognised globally as a biodiversity hotspot, known as the Southwest Australia Ecoregion. Home to many endemic species of plants and animals, this area forms the core habitat for todays threatened bird species, the Carnaby’s black-cockatoo (Calyptorhynchus latirostris). This species is listed as Endangered under the Commonwealth Environment Protection and Biodiversity Conservation Act 1999 (EPBC Act) and as Specially Protected Fauna under the Western Australia Wildlife Conservation Act 1950.

Carnaby’s black-cockatoo (also known as the short-billed black-cockatoo) is a large, conspicuous bird with white tail panels, white cheek patches and a short bill. This species of black-cockatoo is endemic to southwest Western Australia, with their range extending from the Murchison River to Esperance, and inland to Coorow, Kellerberrin and Lake Cronin. They nest in large hollows in Eucalypt woodlands and feed on the seeds of a variety of native plant species including bansksia, dryandra, hakea, grevillea and also marri seeds.

Although exact population numbers are unknown, the population is known to have reduced by over 50% in the last 45 years. This reduction in numbers is attributed to a range of threats including habitat fragmentation (particularly the removal of feeding habitat around breeding habitat), removal of nest hollows, competition for hollows, loss of native food sources, poaching and invasive species.

BirdLife Australia has been working on black-cockatoo recovery actions since 2001, working with local communities, landholders and land managers to secure the protection and conservation of the these black-cockatoos throughout southwestern Australia, to protect these birds and their critical habitat. Umwelt Ecologists in Western Australia also play a role in the protection of this species when carefully considering the range of impacts that potential development may have on the species and it’s habitat throughout the Environmental Impact Assessment process. For further information on the services we provide from our Western Australia office, contact our National Ecology Leader Travis Peake on tpeake@umwelt.com.au or call 1300 793 267.