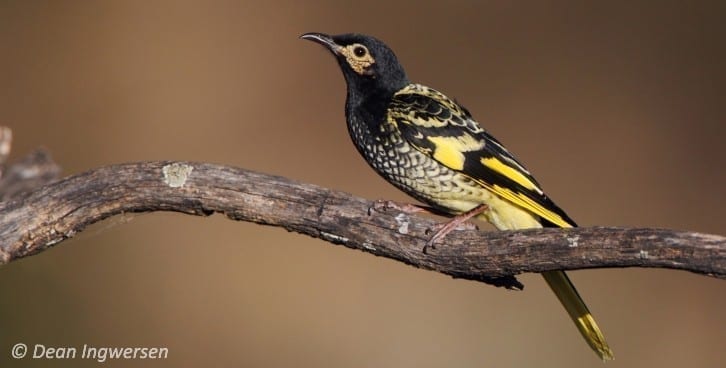 Our Newcastle office is located in Lake Macquarie in the lower Hunter Valley region of NSW. The Hunter Valley region is considered as a diversity hotspot for birds on the east coast of Australia and today’s species, the regent honeyeater (Anthochaera phrygia), is a winter migrant to Lake Macquarie and other parts of the Hunter Valley. Although it is commonly just a seasonal visitor, the regent honeyeater has also nested and successfully bred in the Hunter Valley region. This species is listed as critically endangered under the NSW Threatened Species Conservation Act 1995 and the Commonwealth Environment Protection and Biodiversity Conservation Act 1999. It is also protected by legislation in the ACT, Queensland and Victoria.

The regent honeyeater is a medium-sized honeyeater and is in the same genus as the wattlebirds. The adult plumage is predominantly black with bright yellow edges to the tail and wing feathers, while the body feathers (except for the head and neck) are broadly edged in pale yellow or white. Regent honeyeaters were formerly spread across south-eastern mainland Australia from Rockhampton, Queensland to Adelaide, South Australia. Unfortunately their current range is now patchily distributed across south-east Queensland, New South Wales, and eastern Victoria. They are strongly associated with the inland/western slopes of the Great Dividing Range, though in several regions, including the Hunter Valley and Central Coast of NSW, they regularly utilise more coastal regions.

They feed on the nectar from eucalypts or mistletoe, as well as insects in their environment, and lerp excreted via leaf-sucking psyllid insects. They travel large distances is search of flowering events in their preferred woodland and forest types, primarily being box – ironbark and gum – mahogany associations. Their preferred nesting habitat is river she-oak (Casuarina cunninghamiana) forests along watercourses and breeding in these areas can be sustained where lots of flowering mistletoe is present.

The latest regent honeyeater population estimates are as low as 350-400 wild individuals. Not surprisingly, their greatest current threat is their resilience as a population to deal with stochastic events like wildfires or disease. Other current threats include habitat loss, habitat fragmentation, habitat degradation and competition (particularly noisy miners).

Umwelt’s ecologists working out of their Newcastle office have undertaken extensive surveys for this species within the Hunter Valley and surrounds and continue to push for conservation outcomes for this species through the Environmental Impact Assessment process. For more information on the services provided out of the Newcastle Office, please contact the Ecology Practice Leader Travis Peake at tpeake@umwelt.com.au or call 1300 793 267.