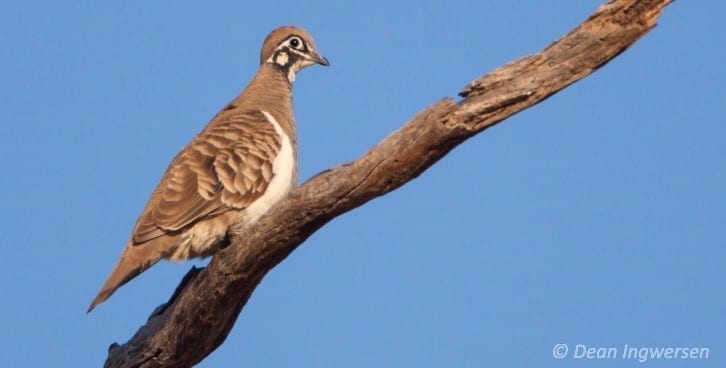 This is the fourth and final threatened species to finish off our celebration of National Bird Week. We would like to start it off with a big thankyou to BirdLife Australia and particularly to Dean Ingwersen for his assistance with supplying photographs of each of the species we have exhibited this week. BirdLife Australia not only promote National Bird Week on this week in October but they also undertake a range of amazing conservation programs for many of our threatened Australian bird species. For more information on BirdLife Australia or to assist them with their conservation programs please visit http://birdlife.org.au/

The squatter pigeon is a medium-sized ground-dwelling pigeon. They are brown with black and white markings on the face and a blue-grey breast bordered below by a white ‘V’.  The known distribution of the squatter pigeon extends south from the Burdekin-Lynd divide in the southern region of Cape York Peninsula to the Border Rivers region of northern NSW, and from the east coast to Hughenden, Longreach and Charleville, Queensland.

The squatter pigeon feeds almost exclusively on seeds from grasses, herbs and shrubs, commonly foraging along the sides of roads. They are also often seen around stockyards, picking seeds from the cattle droppings. Given their diet, the species is rarely seen far from permanent or seasonal rivers, creeks, lakes, ponds and waterholes or artificial dams which they visit daily. This species nests on the ground, in a small excavation dug by the adult bird and lined with grass and leaves.

Umwelt ecologists have undertaken surveys for this species as part of ecological surveys throughout Queensland, and we look forward to further survey work for this species. For more information on our ecological services provided from our Brisbane office please contact the Brisbane Office Manager, Toby Grogan at tgrogan@umwelt.com.au or call 1300 793 267.