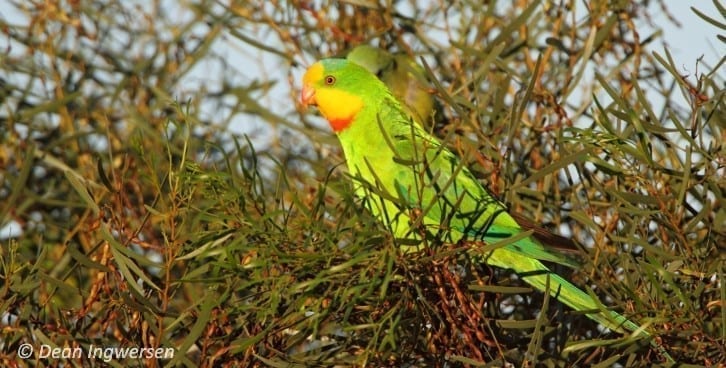 Superb by name and by appearance, this mid-sized parrot has bright green plumage and a long tail. The male (as pictured) is bright green with a bright-yellow face, bright red band across the throat, slightly darker green tail, and a blue leading edge to the upper wing.

The superb parrot nests in a hollow branch or a hole in the trunk of a large tree, usually a eucalypt, especially in river red gum and Blakely’s red gum. Nest trees are usually near a watercourse and are always within 10 km of areas of suitable foraging habitat. After breeding, superb parrots generally move away from their breeding habitat to forage in box eucalypt woodland, box-gum woodlands, and also in crops of wheat or oats. The population of the superb parrot is understood to be in decline with the major threats to this species being habitat clearing and degradation, grazing (depletion of foraging resources), hydrological changes to the major river systems, competition for hollows, insecticide poisoning and Psittacine Beak and Feather Disease.

Umwelt Ecologists in our Canberra office have worked extensively with the ACT government in undertaking superb parrot monitoring in the ACT. For further information on the range of services provided by our Canberra office, please contact Karina Carwardine on kcarwardine@umwelt.com.au or call 1300 793 267.